Cardinals hit man Ron Wolfley deals with the violence of his job by describing it in verse
September 2, 1991-Sports Illustrated 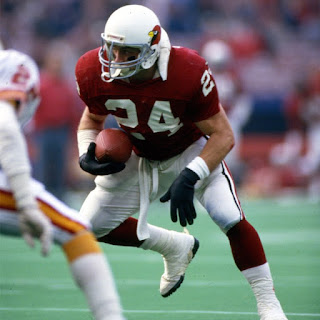 Ron Wolfley, captain of the Phoenix Cardinals' special teams, is Rambo in shoulder pads—perhaps the toughest man you'll ever meet. On game day he drinks 18 cups of black coffee and listens to Pink Floyd songs like Comfortably Numb and Shine On You Crazy Diamond. What does he like most about football? "The butt-kicking and not having to shower to go to work," he says. 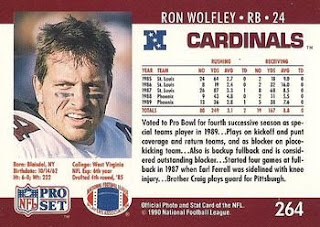 Sprinting downfield on kickoff coverage, Wolfley concentrates so hard on getting to the ballcarrier that he blocks out all sound. The anticipation of knocking somebody on his behind gives him an adrenaline surge. "I don't mind that I'm going to break blood vessels in my forehead when I hit somebody," Wolfley says. "I enjoy hearing guys wheeze and seeing the snot run down their faces. I like the rush of numbness that goes through my body. What I'm most curious about is that time-frozen second where I have no senses whatsoever. 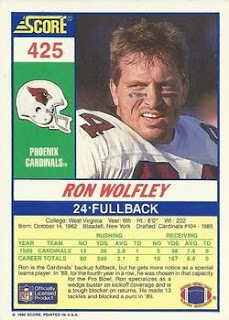 "When I make a huge hit, I don't hear anything. I don't feel anything. I'm seeing stuff, but I won't be able to recall it. I seriously believe that the mind shuts down your body and your senses as a protection mechanism because, let's face it, you're doing something that's not really conducive to your health."

Wolfley, 28, stands six feet and weighs 230 pounds, wears an earring in his left ear and has his hair in a spiked buzzcut. He used to have his jersey number, 24, shaved into the side of his head and a rattail with a colored ribbon tied to the end hanging down the back of his neck. Wolfley, a four-time selection to the Pro Bowl, is a demolition derby on two legs.

He specializes in what he calls "kill shots"—lining up on a kickoff return, sprinting across the field at an angle perpendicular to the opponent he's assigned to block and coldcocking the unsuspecting soul. The force of these collisions has destroyed face masks, cracked helmets and demolished shoulder pads.

"Special-teamers are a different breed from the in-crowd in the NFL," Wolfley says. "We do the jobs nobody else wants. We're the mutants. You'll never see us on Wheaties boxes because, when we're on the field, half the fans are in the bathroom or getting a hot dog. The other half is watching the guy who's kicking the ball or the man who's returning it. Nobody sees the personal battles going on. Nobody knows who I am. Even my Aunt Edna still wonders what I'm doing."

Wolfley delivered his most devastating hit on Sept. 21, 1986, against the Buffalo Bills at Rich Stadium, when he blindsided linebacker Ray Bentley on a kickoff return. Bentley soared five yards in one direction, and Wolfley shot off five yards the other way. Bentley wound up with a separated right shoulder and double vision. Wolfley's face mask was ripped off his helmet, and he had a severe concussion. He staggered on the field for a few minutes until a teammate directed him to the sideline. His wife, Kathy, who was sitting in the stands, went down to check on his condition, but he didn't recognize her. 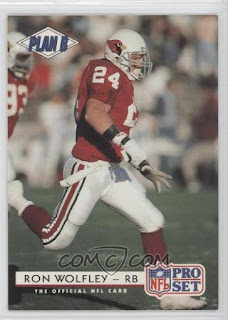 Later Wolfley started to rant about returning to the game and defied the team doctor's orders to stay on the bench. Twice he ran onto the field and lined up without his helmet but was quickly ushered off. Finally the Cardinals' coaches put defensive lineman Mark Duda in charge of restraining Wolfley on the sideline.

Despite the pain and anonymity, Wolfley is a special-teamer in body and soul. If he had his druthers, his name would be deleted from the Phoenix depth chart as a reserve fullback. In six seasons he has carried the ball 82 times, for 252 yards and two touchdowns.

"I get more of an adrenaline rush playing on special teams than I have ever gotten playing from scrimmage," Wolfley says. "It's a blast, a total body experience. If only they could dress up businessmen in helmets and tell them to sprint 50 yards and run into a 300-pound guy. They wouldn't have heart attacks or get stressed out. We wouldn't need Disneyland because this ride eclipses anything that you could ever go on. It's the ride of your life."

Off the field Wolfley has his rage in check; he displays no love of violence. He'll poke fun at his Rambo personality when introduced at fund-raisers in Phoenix, pulling a headband out of his suit jacket and slipping it on before speaking. At home he plays Mr. Mom to his three children, Ashley, 7, Connor, 5, and Jenna, one year. A man with strong Christian beliefs, he gains strength from daily prayers and reading the Bible. "I have no fear on the football field," Wolfley says. "Failing my children as a father, my wife as a husband and my God as a servant, that's what petrifies me."

In solitary moments, usually in his den late at night, Wolfley writes poetry about his special teams experiences. He calls it primitive poetry because the punctuation isn't perfect and the words aren't always spelled correctly. Here's a sample, entitled The Army of Sorrow:


Crack goes the whip, a shot in the hip
An intruder assaults my senses.
Boom goes my head, now comes the dread
This foe cares not as it dispenses.
This time my shoulder, hit by a boulder
This force that comes like a train.
It doesn't matter where, it's really unfair
It quickly lays siege to my brain.
I try to stride, there's nowhere to hide
This battle is fought in my spirit.
I try to adjust, play on I must
I have learned that I cannot fear it.
The jury is in, I think that I'll win
But the verdict I'll feel on the 'morrow.
Today I'm a knight, today I will fight
This siege by the Army of Sorrow. 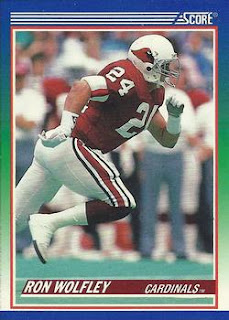 Wolfley began writing poetry five years ago, when he was wrestling with his violent and gentle sides. While watching game films, he felt detached from the destructive force inside the number 24 jersey on the screen. He suffered three severe concussions in 1986, and he started to wonder if he took pleasure in injuring himself. He never intended his poems to be read by anybody but himself, not even Kathy, and for a long time she didn't know that he was writing them.

"I just needed my own personal analysis of my job," Wolfley says. "I needed to be able to say, 'O.K., this is what I do,' and then answer the questions, Why do I do that? How come I feel that way about it? At first I'd write them and rip them up. It was purely therapeutic. I didn't want to go to a shrink and pay him $200 to say, 'When did it all start with you, Ron?' I thought that was bogus."

It all started for Wolfley in the Buffalo suburb of Hamburg, four miles from Rich Stadium. He was the second-youngest of Ron and Esther Wolfley's five children. Ron Sr. was a short, barrel-chested truck driver, and Esther was a self-proclaimed football coaching genius. All three of her sons played football: Craig, 33, was an offensive lineman at Syracuse and now is a guard for the Minnesota Vikings; Ron was a fullback, known mostly for his blocking, at West Virginia before becoming Phoenix's fourth-round draft choice in 1985; and Dale, 24, was a guard at West Virginia who was not drafted by the NFL. Esther used to get down in an offensive lineman's stance to give the boys pointers. She and Ron Sr. struggled to make ends meet, and often there was barely enough food to feed their brood. Ron wore hand-me-down tennis shoes from Craig.

"My father would get up at four in the morning and go out in the dead of winter, in the freezing cold," Ron says. "He did it with a smile on his face, knowing his kids were tucked away in a warm bed with a roof over their heads. He was my idol—a tough, tough guy."

Football was Ron's escape from the hard times. "When you live on the wrong side of the tracks in a
very nice town, you have to justify yourself in some way," he says. "I was good at football, so I worked at it. It made me feel proud and accepted." 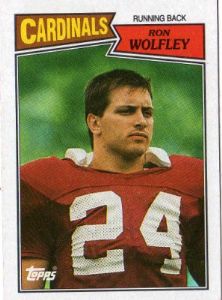 In the fall of 1982, during Wolfley's sophomore season at West Virginia, Ron Sr. was dying of leukemia after a five-year battle. Instead of confronting his father's illness, Wolfley chose to ignore it. He would purposely stay out of the house at times during his visits to avoid having to see his parents suffer.

"My father lay there and couldn't move," Wolfley says. "He used to be 220 pounds, and now he was about 120. It freaked me out. My mom was suffering with him. I was filled with so much frustration and rage that I wanted to make other people feel the same way I did, put them in the same pain. The only outlet I had was football. I didn't care what I did to myself, because I knew that it couldn't compare to the pain that my father was going through. But I could make other people hurt."

Not until Wolfley began to write poetry did he realize his anger and frustration over his parents' suffering were the origin of his violent play on special teams. "I learned to play the physical game I do now under the strain of his dying," Wolfley says. "Now it's a switch that I can turn on and off. When I put on the helmet and the eye black, not a lot of me is left. The 19-year-old kid who was hurting inside takes over."

That realization helped Wolfley to accept his father's death and to reconcile his own contrasting personalities. Now when he watches himself in game films delivering one of those knockout hits he calls "a visit from Judge Dread," or sending an opponent skyrocketing on a "decleater," Wolfley winces a bit. But he still looks forward to reviewing that next time-frozen second.

"When you settle into the attack mode, you've got to figure out some way to survive," Wolfley says. "To walk out in one piece, you've got to be more angry or more aggressive than the next guy. The day I stop hitting is the day I'm out of football. For me, that's all there really is. And I love it." 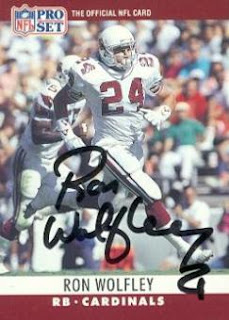