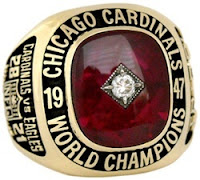 The Chicago Cubs’ first World Series win in 108 years means there is a new team with the longest...

The Cardinals’ last championship was in 1947 before the Super Bowl even existed. Back then, the team played in Chicago.

Chicago Cardinals memorabilia is hard to find in the Valley of the Sun. Mike Weber, owner of Hall of Fame Collectables in Mesa, said he last had some in stock 12 years ago.

“Phoenix and the history of sports is not like the No. 1 thing,” Weber said. “If I had my choice of stocking Mickey Mantle or somebody from the yesterday Cardinals, there's no contest.”

But Weber thinks it might behoove the future of the franchise to play up the past.

“The more talk about history and not winning, the more publicity the Arizona Cardinals get. The more you mention it, the more talked about, the more action,” he said.

The Cubs played the “loveable loser” card to perfection over the last few decades, but the Cardinals have been reluctant to embrace their history at the more modern-looking University of Phoenix stadium, said Greg Smith, who runs ChicagoCardinals.org.

“You see the pictures of the old Chicago guys in the atrium as you're walking around. The pictures are there, but there's no explanation as to who these guys are,” he said.

Smith said the Cardinals have traditionally been a “have not” franchise; a smaller market team that operated in the red in the early years and may have been hurt most over the years by their mediocrity.

If the Cardinals stay true to their Chicago roots and wait 108 years to win a championship, it won’t happen until 2055.