The Cardinals' Legacy of Futility

For those of us who are long time and die hard fans, we remember well when the Cardinals were the laughing stock of professional football. The Cardinals simply sucked, and there is no other way to put it nicely. However, we true fans persevered until ultimately the Cardinals righted their sinking ship and now have the dedicated fans and fan base they had always sought to attract in Chicago and St. Louis. With that said though, success in football can be fleeting. As a result, I am rewinding the time machine to not that long ago when Rick Reilly took aim at the Cardinals' decades long futility. 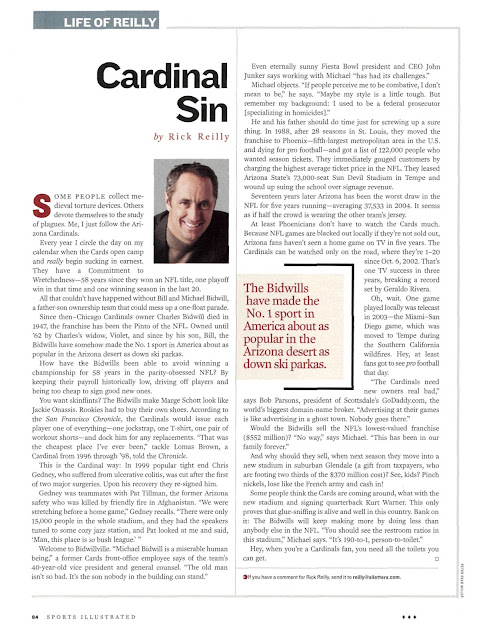 Some people collect medieval torture devices. Others devote themselves to the study of plagues. Me, I just follow the Arizona Cardinals.

Every year I circle the day on my calendar when the Cards open camp and really begin sucking in earnest. They have a Commitment to Wretchedness--58 years since they won an NFL title, one playoff win in that time and one winning season in the last 20.

All that couldn't have happened without Bill and Michael Bidwill, a father-son ownership team that could mess up a one-float parade.

Since then--Chicago Cardinals owner Charles Bidwill died in 1947, the franchise has been the Pinto of the NFL. Owned until '62 by Charles's widow, Violet, and since by his son, Bill, the Bidwills have somehow made the No. 1 sport in America about as popular in the Arizona desert as down ski parkas.

How have the Bidwills been able to avoid winning a championship for 58 years in the parity-obsessed NFL? By keeping their payroll historically low, driving off players and being too cheap to sign good new ones.

You want skinflints? The Bidwills make Marge Schott look like Jackie Onassis. Rookies had to buy their own shoes. According to the San Francisco Chronicle, the Cardinals would issue each player one of everything--one jockstrap, one T-shirt, one pair of workout shorts--and dock him for any replacements. "That was the cheapest place I've ever been," tackle Lomas Brown, a Cardinal from 1996 through '98, told the Chronicle.

This is the Cardinal way: In 1999 popular tight end Chris Gedney, who suffered from ulcerative colitis, was cut after the first of two major surgeries. Upon his recovery they re-signed him.

Gedney was teammates with Pat Tillman, the former Arizona safety who was killed by friendly fire in Afghanistan. "We were stretching before a home game," Gedney recalls. "There were only 15,000 people in the whole stadium, and they had the speakers tuned to some cozy jazz station, and Pat looked at me and said, 'Man, this place is so bush league.'"

Welcome to Bidwillville. "Michael Bidwill is a miserable human being," a former Cards front-office employee says of the team's 40-year-old vice president and general counsel. "The old man isn't so bad. It's the son nobody in the building can stand."

Even eternally sunny Fiesta Bowl president and CEO John Junker says working with Michael "has had its challenges."

Michael objects. "If people perceive me to be combative, I don't mean to be," he says. "Maybe my style is a little tough. But remember my background: I used to be a federal prosecutor [specializing in homicides]."

He and his father should do time just for screwing up a sure thing. In 1988, after 28 seasons in St. Louis, they moved the franchise to Phoenix--fifth-largest metropolitan area in the U.S. and dying for pro football--and got a list of 122,000 people who wanted season tickets. They immediately gouged customers by charging the highest average ticket price in the NFL. They leased Arizona State's 73,000-seat Sun Devil Stadium in Tempe and wound up suing the school over signage revenue.

Seventeen years later Arizona has been the worst draw in the NFL for five years running--averaging 37,533 in 2004. It seems as if half the crowd is wearing the other team's jersey.

At least Phoenicians don't have to watch the Cards much. Because NFL games are blacked out locally if they're not sold out, Arizona fans haven't seen a home game on TV in five years. The Cardinals can be watched only on the road, where they're 1--20 since Oct. 6, 2002. That's one TV success in three years, breaking a record set by Geraldo Rivera.

Oh, wait. One game played locally was telecast in 2003--the Miami--San Diego game, which was moved to Tempe during the Southern California wildfires. Hey, at least fans got to see pro football that day.

"The Cardinals need new owners real bad," says Bob Parsons, president of Scottsdale's GoDaddy.com, the world's biggest domain-name broker. "Advertising at their games is like advertising in a ghost town. Nobody goes there."

Would the Bidwills sell the NFL's lowest-valued franchise ($552 million)? "No way," says Michael. "This has been in our family forever."

And why should they sell, when next season they move into a new stadium in suburban Glendale (a gift from taxpayers, who are footing two thirds of the $370 million cost)? See, kids? Pinch nickels, lose like the French army and cash in!
Posted by スミス at 8:29 AM